Solenoid: A coil of many circular turns of insulated copper wire wrapped closely in the shape of a cylinder is called a solenoid.

Magnetic Field due to a Current in a Solenoid:

Properties of the field lines inside the solenoid:

Electromagnet: A magnet is made by magnetic field produced inside a solenoid using magnetic materials like soft iron is called an electromagnet.

Some properties of electromagnet:

1. The magnetic field produced is generally very strong.
2. The strength of the magnetic-field can be controlled by controlling various factors such as the current and the number of turns in the solenoid.
3. The polarity of the magnet can be changed by reversing the direction of current while magnetic field is being produced by solenoid.

Differences between electromagnet and parmanent magnet:

FORCE ON A CURRENT-CARRYING CONDUCTOR IN A MAGNETIC FIELD:

When a a strong horse-shoe magnet is placed in such a way that the rod lies between the two poles with the magnetic field directed upwards. For this the north pole of the magnet is kept vertically below and south pole is kept vertically above the aluminium rod. When a current is passed through the aluminium rod from end B to end A. It is observed that the rod is displaced. It is also observed when the direction of current flowing is reversed through rod the direction of displacement is also reversed. 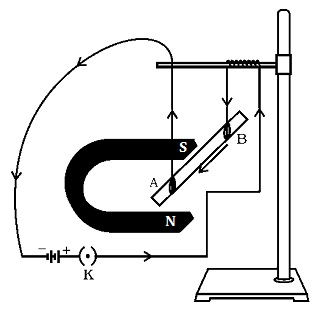 (i) A magnetic field exerts a force on a magnet placed in the vicinity of the conductor.

(ii) A force is exerted on the current-carrying aluminium rod when it is placed
in a magnetic field.

the direction of current is reversed.

The force on the conductor:

The force on the conductor depends upon the flowing two things:

(i) The direction of current and

(ii) The direction of the magnetic field.

Other Pages of this Chapter:

5. Important Questions Based on Chapter

4. Carbon and its Compounds

4. Functional Group and Nomenclature of Hydrocarbons

8. How do Organisms Reproduce