Our CBSE Notes for Notes 2. Is Matter around us Pure - Colloidal solution and Tyndall Effect | Class 9 Science - Toppers Study is the best material for English Medium students cbse board and other state boards students.

Topper Study classes prepares CBSE Notes on practical base problems and comes out with the best result that helps the students and teachers as well as tutors and so many ecademic coaching classes that they need in practical life. Our CBSE Notes for Notes 2. Is Matter around us Pure - Colloidal solution and Tyndall Effect | Class 9 Science - Toppers Study is the best material for English Medium students cbse board and other state boards students.

Suspension: The hetrogenous mixture in which solids are dispersed in liquids, are called suspensions.

A suspension is a heterogeneous mixture in which the solute particles do not dissolve but remain suspended throughout the bulk of the medium. Particles of a suspension are visible to the naked eye.

Properties of a Suspension:

(i) It is a hetrogeneous mixture.

(ii) The particles of a suspension can be seen by necked eyes.

(iii) The particles of a suspension scatter a beam of light passing through it and make its path visible.

(iv) A suspension is unstable.

(v) They can be separated from the mixture by the process of filtration.

The particles of a colloid are uniformly spread throughout the solution. Due to the relatively smaller size of particles, as compared to that of a suspension, the mixture appears to be homogeneous. But actually, a colloidal solution is a heterogeneous mixture, for example, milk, smoke and fog etc.

(i) A colloid is a heterogeneous mixture.

(ii) The size of particles of a colloid is too small to be individually seen by naked
eyes.

(iii) Colloids are big enough to scatter a beam of light passing through it and
make its path visible.

(iv) They do not settle down when left undisturbed, that is, a colloid is quite
stable.

(vi) Colloidal particles can not be seperated by the process of filteration.

The components of a colloidal solution:

(ii) dispersion Medium:  the component in which the dispersed phase is suspended is known as the dispersing medium.

Colloids are classified according to the state (solid, liquid or gas) of the dispersing medium and the dispersed phase.

The small particles of colloidal can easily scatter a beam of visible light, this scattering of a beam of light is called the tyndall effect.

Cause of tyndall efect: This happens due to the scattering of light by the particles of dust and smoke in the air.

This effect is named after the name of the scientist who discovered this effect.

General examples of colloids that show the tyndall effect: 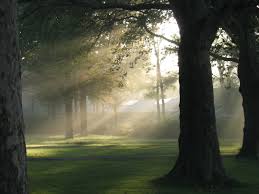 Other Pages of this Chapter: 2. Is Matter around us Pure

Page 1. 2. Is Matter around us Pure | Pure Substances

Page 2. 2. Is Matter around us Pure | Types of mixtures and solution

Page 3. 2. Is Matter around us Pure | Colloidal solution and Tyndall Effect

Page 4. 2. Is Matter around us Pure | Methods of Separation of a mixture

1. Matter in Our Surroundings

2. Types of mixtures and solution

4. Methods of Separation of a mixture

4. Structure of The Atom

5. The Fundamental Unit of Life

1. The benefits of Classification

9. Force and Laws of Motion

1. Force and its Kinds

2. The First Law of Motion

3. The Second Law of Motion

4. The Third law of motion

4. The Types of Sound