Our ncert solutions for Exercise 13.2 Class 8 maths 13. Direct and Inverse Proportions - ncert solutions - Toppers Study is the best material for English Medium students cbse board and other state boards students.

Topper Study classes prepares ncert solutions on practical base problems and comes out with the best result that helps the students and teachers as well as tutors and so many ecademic coaching classes that they need in practical life. Our ncert solutions for Exercise 13.2 Class 8 maths 13. Direct and Inverse Proportions - ncert solutions - Toppers Study is the best material for English Medium students cbse board and other state boards students.

CBSE board students who preparing for class 8 ncert solutions maths and Mathematics solved exercise chapter 13. Direct and Inverse Proportions available and this helps in upcoming exams 2023-2024.

NCERT Solutions do not only help you to cover your syllabus but also will give to textual support in exams 2023-2024 to complete exercise 13.2 maths class 8 chapter 13 in english medium. So revise and practice these all cbse study materials like class 8 maths chapter 13.2 in english ncert book. Also ensure to repractice all syllabus within time or before board exams for ncert class 8 maths ex 13.2 in english.

Sure! The following topics will be covered in this article

Q1.  Which of the following are in inverse proportion?

(i) The number of workers on a job and the time to complete the job.

(ii) The time taken for a journey and the distance travelled in a uniform speed.

(iii) Area of cultivated land and the crop harvested.

(iv) The time taken for a fixed journey and the speed of the vehicle.

(v) The population of a country and the area of land per person.

(ii) The time taken and distance are in direct proportion because if we increase in time it covers more distance. Hence both quantities increase together.

(iii) As area will be cultivated as more crops will be harvested. So these are direct proportion.

(v) If population is increased area land will be short to live. Therefore these both quantity are in inverse proportion.

Q2.  In a Television game show, the prize money of Rs 1,00,000 is to be divided equally amongst the winners. Complete the following table and find whether the prize money given to an individual winner is directly or inversely proportional to the number of winners?

Solution: Prize will be distributed to winner in inverse proportion.

As both quantities are in inverse proportion.

Suppose the table has …

Q3.  Rehman is making a wheel using spokes. He wants to fix equal spokes in such a way that the angles between any pair of consecutive spokes are equal. Help him by completing the following table. 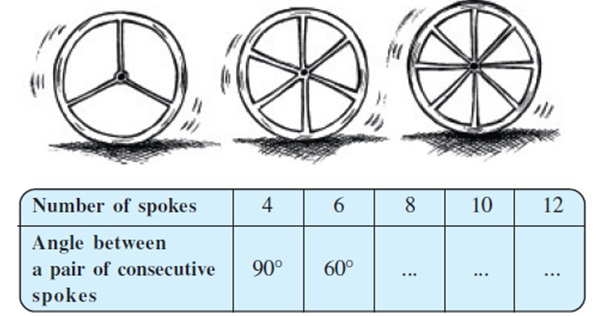 The relation between spokes and angle between consecutive spokes are in inverse proportion. 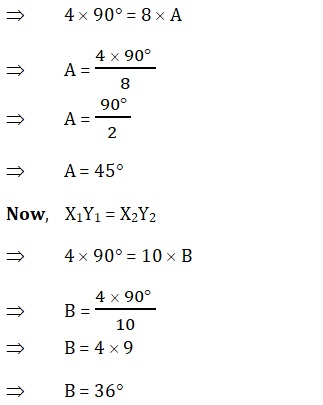 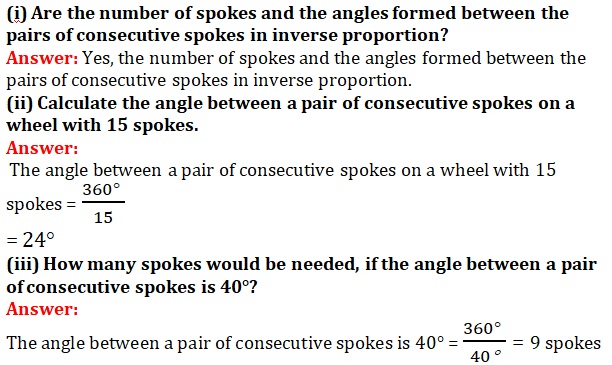 Q4.  If a box of sweets is divided among 24 children, they will get 5 sweets each. How many would each get, if the number of the children is reduced by 4?

According to question we have the table like this

Other Pages of this Chapter: 13. Direct and Inverse Proportions

2. Linear Equations in One Variable