Our ncert solutions for Solutions 11. Human Eye and Colourful World - Additional Questions With Solutions | Class 10 Science - Toppers Study is the best material for English Medium students cbse board and other state boards students.

Topper Study classes prepares ncert solutions on practical base problems and comes out with the best result that helps the students and teachers as well as tutors and so many ecademic coaching classes that they need in practical life. Our ncert solutions for Solutions 11. Human Eye and Colourful World - Additional Questions With Solutions | Class 10 Science - Toppers Study is the best material for English Medium students cbse board and other state boards students.

Que. – What is iris? Write its function.

Ans. – The colour part of eye is known as iris . it gives blue black & brown coulor to the eyes. It has a hole in the middle named pupil which regulates the amount of light entering in to the eye.

Que. – Write the function of cornea.

Ans. – It refracts most of the light rays into the eye.

Que. – Write the name of light sensitive part of the human eye.

Ans. – Its function is to carry electrical signals to the brain.

Que. – Name the eye muscles which have ability to change the focal length and curvature of lens.

Que – What do you understand by power of accommodation?

Ans. – The ability of the eye lens to adjust its focal length is called power of accommodation.

Que. - The wavelength of which colour is the longest.

Que. - Write the name of light sensitive part of eye.

Que. - What is called the band of the colored components of a light beam?

(I)   looking sky blackish to an astronaut.

Ans.  - The Earth’s atmosphere has many types of colloidal particles, which makes the path of a beam of light visible. Such a phenomenon is known as scattering of light.

(I)    looking sky blackish to an astronaut.

Que: – Why does sky look dark to an astronaut?

Que. -  Why do the small particles of air scatter blue colour more speedily than red colour?

Que. – What is presbyopia ? give region for this defect? How does it remove?

Ans. – When the eyes have lost completely their power of accommodation. The near point gradually recedes away. The persons find it difficult to see near by objects comfortably and distinctly without corrective eye-glasses. This defect is called presbyopia.

Que. -  A person can’t read a news paper clearly but he can see comfortably the newspaper placed at distance of 80 cm.

(i) By which defect of vision does this person suffer?

Ans. – He suffers with hypermetropia.

(ii) What is correction of this defect of vision?

(iii) Give two regions for this defect of vision?

(b)   The eyeball has become too small.

(iv) Show to draw the light ray graph of this defect of vision, How is this corrected? 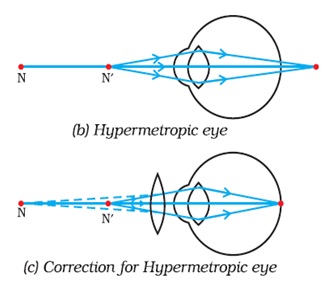 Other Pages of this Chapter: 11. Human Eye and Colourful World

4. Carbon and its Compounds

8. How do Organisms Reproduce